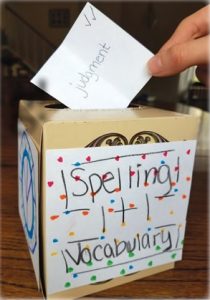 I have a confession to make. As a homeschool mom, I was a total curricula nerd. Introduce me to a new resource or program, and I would devour it as I would a thrilling novel. Every year, choosing curricula was the highlight of my spring. Yes, I need to get out more.

I have another confession to make. When it came to spelling programs, I was stymied. With at least a quarter-million words in the English language, how could any program be broad enough to help my children master enough words, as well as learn how to decode new words? Sure, I knew of programs that used systematic methods of instruction, but I regarded them with skepticism. Something about them struck me as inefficient and busy. Besides, I had no time for that in our already crowded curriculum.

Still, I couldn’t exactly ignore spelling, so I decided that I at least needed to teach my girls phonics families and basic rules. You know, rules like ‘i’ before ‘e,’ except after ‘c’ and when sounding like ‘a,’ as in ‘neighbor’ and ‘weigh’. Not sure of the best way to go about this, I finally chose the easy route, grabbing a spelling workbook for each of the girls from my bookstore’s education department. It was cheap and offered the basics I wanted. I didn’t know what else to do.

For the next few years, we used this workbook, but I never did feel much at ease with it. Although the spelling rules and word families that it taught were important, the weekly word lists were seldom challenging. Besides, the workbook completely left out vocabulary building, which meant I needed another program.

One day, I visited a website and read an article about a new approach to spelling instruction. It claimed that with an empty tissue box and a pile of scrap paper squares, parents didn’t need to buy a spelling program. All they had to do was follow the accompanying study method. The best part of the method was that the words students learned were only those they didn’t already know. Weekly word lists often featured words my girls knew. This was a flaw in the workbook approach that frustrated me, because it meant that the girls didn’t learn many new words. With tissue-box spelling, every spelling word was a challenge. I couldn’t help being intrigued. It seemed so simple and natural. Could it really work?

That fall I decided to give the method a try with Ruby, my fourth-grader, combining it with a vocabulary program that taught Latin and Greek roots. First, Ruby decorated an empty tissue box, giving it a colorful label and cutting away the plastic from the opening. Then I made a bunch of paper squares about two inches by two inches. That done, it was time to implement the method.

After a couple of months, Ruby had collected many words to learn, so it took her a while to earn her fifth checkmark for each word. At first, I thought this was a weakness of the method, for it meant she didn’t have time to practice each word regularly. I soon realized, however, that this actually promoted long-term mastery. The only thing the method lacked was instruction in phonics families and spelling rules; however, our reading program covered phonics, and spelling rules could be added to the box to memorize as needed.

For only a dollar, I found that the tissue box spelling method was an efficient way to improve spelling and build vocabulary. In fact, it can be easily adapted to other rote memorization tasks, such as history or geography facts. As a homeschool parent, I discovered it to be one of those happy instances of getting much more than I paid for!

Understanding Literature and Nonfiction Texts: Simple Tools for All Ages and Reading Levels